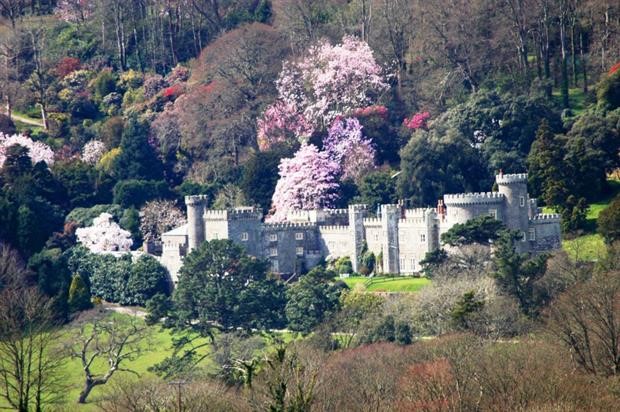 Just five miles south of Mevagissey and overlooking Porthluney Cove, lies the spectacular Caerhays, winner of the 2016 Garden of the Year Award (Historic Houses Association).  We always begin to think about this unique place in February, when the spring gardens re-open to the public until June.  They are internationally renowned for the largest collection of magnolias in England and containing one of four National Magnolia Collections (National Council for the Conservation of Plants and Gardens).  A couple of years ago, when we first visited the 140 acre estate, we were bowled over, not only by the spring-time wonderland but by the stunning views of the nearby coastline and steep valleys.  It must be one of the most special and tranquil places on the south Cornish coast.

The gardens originated from the work of plant hunters in China at the start of the 20th century and the castle itself was designed by the famous Regency architect John Nash around 200 years ago.  Both the building and the two families who have lived and worked at Caerhays have played significant roles in the history of Cornwall and its former tin mining industry.

We have just spent a glorious week in Mevagissey.  Although some may view it as the “off” season, or an extra break in those not so tempting “shoulder months”, we can only recommend experiencing Cornwall’s south coast at this time of year.

The sheltered beaches of The Roseland are still there, and every bit as tempting as in high summer – long stretches of golden sand set against clear blue skies – just without the traditional holiday makers!

Most of the cafes and restaurants remain open – this was a chance for another exceptional meal at the local Salamander restaurant on Tregoney Hill – in fact we wouldn’t have got a table without a reservation, and at Sam’s On The Beach at nearby Polkerris.  Most of the visitor attractions still welcome tourists – the shops at Tregothnan (the only English tea estate) and St Austell Brewery were spot on for some unique Christmas shopping.

Of course, the twin harbour retains its distinctive atmosphere whatever the season, and it was interesting to see several photographers armed with tripods, hoping to catch the perfect shot of the iconic lighthouse.